The Occupational Safety and Health Administration (OSHA) regulates the levels of silica dust allowed in work environments. They have a set of standards, rules and regulations that determine acceptable levels of silica dust to keep employees safe. OSHA currently requires all workplaces to have a permissible exposure limit of 50 micrograms per cubic meter of air over 8 hours.

How Do You Remove Silica Dust from Your Work Space?

The idea is to ensure minimal silica dust goes airborne after it has been produced. Some of the common methods used include water showers and vacuums. Water showers are set to fall over workspace and they drown and suppress the amount of silica dust in the air to reduce exposure. On the other hand, vacuums capture the dust at the source. When placed at the source of the silica dust, it will be sucked into the vacuum instead of being let into the air.

The two methods cannot remove all the silica dust from the air. At times, the levels of exposure still remain high even when these systems are in place. A NIOSH approved respirator becomes essential in such cases. The respirator is much more effective, but it does not protect those working in close vicinity of the silica dust source.

How Long Does Silica Dust Stay in the Air?

This form of dust is so small that it can stay in the air for up to 12 days. Sometimes when we don’t see dust, there are still particles circulating about!

The particle size of this particular type of dust makes it able to float around longer than other types ̶ sometimes even weeks after being disturbed. One thing you might not have noticed: If your house releases an odd smell such as “concrete” then odds are some kind of dust is present too because they’re often related

Have an Exposure Control Plan

The plan clearly outlines how the workers are going to minimize their exposure to the silica dust. It describes the engineering control systems that are in place and worker practices that will help minimize exposure for each worker. OSHA requires workers to be trained to follow the plan and properly use the necessary equipment.

It is also important that exposure records are taken and medical exams are performed on the workers regularly. That would help identify and handle any health problems early before they become worse. 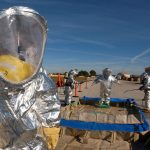 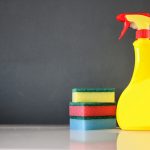